Despite the groundbreaking sophistication of twenty-first century science, two of the great solutions that remain elusive in medical research are the cure to cancer and the ability to regenerate and renew organs. But if asked to identify the fundamental problems and pathways that underlie cancer and regeneration, the answers are as yet incomplete. At the BWH Pathology’s Program in Dermatopathology Stem Cell/Epigenomics Laboratory however, the fundamental problem of what may be responsible for both skin cancer and non-regenerative healing focuses on one central and potentially transformative theme: the ability to regulate DNA behavior in small numbers of cells that on the one hand pathologically drive the cellular chaos of malignancy, and on the other physiologically direct the refined orchestration of new tissue and organ formation.

The paths to the Lab’s mission taken by its leaders, Dr. George Murphy, BWH/HMS Professor of Pathology, and Dr. Christine Lian, BWH/HMS Associate Professor of Pathology, converged quite by accident. Murphy, while at BWH in the 1980’s, collaborated with BWH surgeon Dennis Orgill and MIT materials scientist Ioannis Yannas in the development of a biodegradable scaffold (“artificial skin”) that had the capacity to thwart the formation of dysfunctional contractile scars and for the first time promote true regenerative skin healing. This was to change several decades later in 2007, when Murphy, along with BWH Drs. Tobias Schatton and Markus and Natasha Frank, pioneered a discovery that made the cover of the journal, Nature – the first identification of stem cells responsible for malignant melanoma, a potentially deadly and as yet poorly understood form of skin cancer. Additional studies using biomarkers identified populations of stem cells in normal skin that are not only vulnerable to malignant transformation, but that also normally have the potential to form new skin if appropriately stimulated. Like queen bees in a hive of hundreds of workers, relatively rare malignant skin stem cells are crucial to the genesis and maintenance of an entire cancer tumor. In contrast, when these cells are benign they are essential to the health and well-being of a mature, functional skin. Thus, the problem in advanced melanoma, and potentially its therapeutic solution, could be reduced to one central directive: target and eliminate malignant stem cells. As a corollary, the ability to manipulate the fate of normal skin stem cells could also hold the secret to regenerative wound healing through growth of new structurally and functionally intact skin, rather than its replacement by dysfunctional, contractile scar tissue. How to control stem cell behavior and destiny, therefore, became the burning question.

By 2011, Dr. Lian joined the Program in Dermatopathology, bringing with her a fundamental insight: melanoma initiation and growth could be controlled in animal models by simply restoring a reversible defect in the melanoma cell that was located in its “epigenome”, the external coating that envelops the DNA molecule and regulates its behavior (or potentially its misbehavior, in the case of a malignancy). Published in 2012 in the journal Cell, Dr. Lian’s landmark discovery spawned a new and exciting prospect – that therapeutic modulation of the skin stem cell epigenome may be a key both to controlling melanoma, as well as to inducing skin regeneration. Moreover, as work in Dr. Lian’s and Murphy’s Labs began to focus on skin stem cell epigenetics, findings indicated that relatively common agents may be capable of governing the behavior of the stem cell epigenome – agents as simple as ascorbic acid (vitamin C), and resveratrol, a component of red wine! 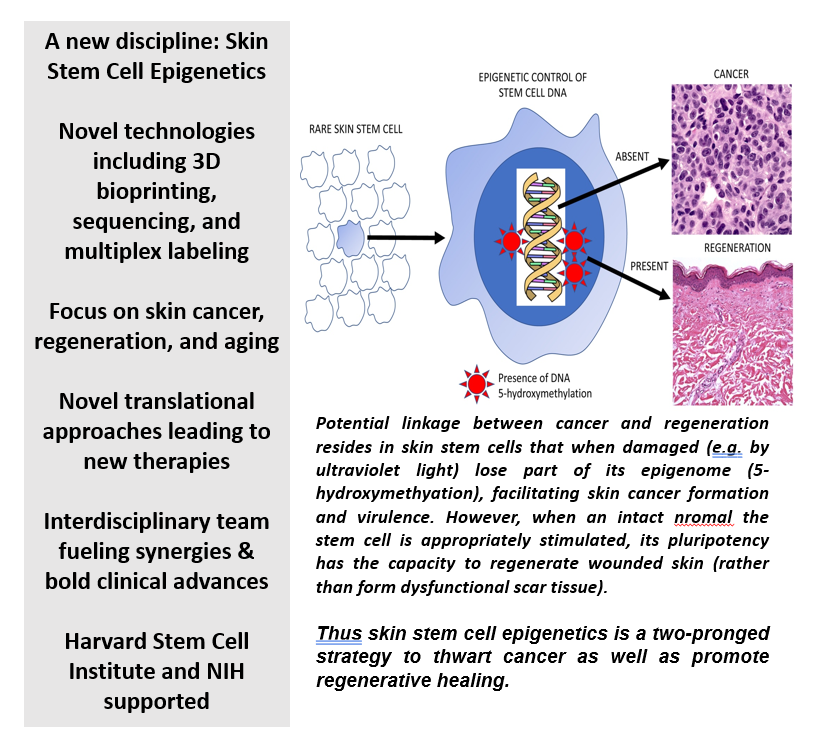 From these beginnings, a new research direction has been established, one intent on identifying novel ways to target and destroy skin cancer stem cells as well as to control and regulate skin stem cells capable of regenerative healing through therapeutic modulation of the epigenome. This new discipline of cutaneous stem cell epigenetics routinely deploys technologies as diverse as next generation epigenetic sequencing, three-dimensional bioprinting, and highly multiplexed image capture to visualize simultaneously many critical stem cell molecules, seeking inroads into this as yet poorly understudied facet of cancer and regenerative biology. The Lab works closely with the Harvard Stem Cell Institute, and major collaborative proposals are planned and are already underway in the areas of regenerative wound healing and cancer prevention and epigenomic therapeutics. In fact, the National Institute of Aging has recently recognized this work through funding of a Harvard-wide team science Program Project Grant request for over $13 million.

The epigenomic control of stem cells may have far-reaching consequences, from their participation in other disorders under study in the lab, like psoriasis, to cancers beyond melanoma, and ultimately to organ regeneration beyond skin. Drs. Lian and Murphy believe that now that the potential problems can be seen more clearly, the goal toward solutions is now to home in on the stem cell epigenome in ways that will lead to new and effective therapies for our patients. And the BWH Stem Cell/Epigenomics Lab is aggressively pursuing this goal.